Home » About Us » Our Practice

Church Street Animal Hospital is devoted to your pet’s well being.

In 1973, Dr. Edward J. Oliver purchased a small house in rural Clarkston, Georgia. The two bedroom home had previously housed a child day care center, but Dr. Oliver had no problem envisioning his future animal hospital there. After weeks of planning and hard work, separate rooms for surgery, treatments, and kenneling of family pets had been completed. A final coat of light green paint preceded the official opening of “Clarkston Animal Hospital” and a history filled with countless miracles began.

Dr. Oliver was a compassionate man who made himself available 24 hours a day to help animals in need. A midnight phone call would have him on his way to provide emergency care, even for the smallest of kittens. During the day, the grass “parking lot” was frequently visited by a goat needing a hoof trim or a horse needing a lameness exam. Large animal farm calls were a regular part of his busy day. His reputation as a gentle, dedicated veterinarian helped his business flourish and within a few short years, his plans for a building expansion were to become a reality.

The new building addition was completed in 1984. At that time, the previously “rural” city of Clarkston had become a suburban community with very different pet care needs. Large animal calls were no longer a regular occurrence. The parking lot had been paved and most of the patients were of the canine or feline variety. The DeKalb-Gwinnett Animal Emergency Clinic had been established by Dr. Oliver and a small group of local veterinarians in 1978. After hours emergency calls were now being seen by a specialized team, in a very time efficient manner. Dr. Oliver’s dream had come to fruition . Within two years, the hospital would be sold and a well deserved retirement would be in the making,

Dr. Cynthia J. Fordyce purchased the hospital from Dr. Oliver in 1985. Although she was the new owner of the Clarkston Animal Hospital, she was far from new to the scene. Her history with the hospital actually dated back to the original purchase of the building in 1973.

At that time, young Cyndy had only dreamed of attending vet school. She was an energetic, determined young woman, who pitched right in to help with the original building renovations. Over the years, she continued to help Dr. Oliver by serving as his receptionist, kennel attendant, and surgical assistant. She also helped with his bookkeeping, farm calls, building maintenance and landscaping; but she had not forgotten to pursue her education. 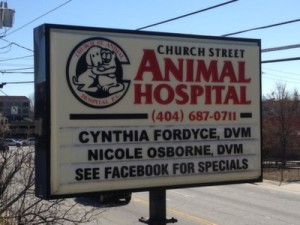 In 1981, she graduated from the University of Georgia Veterinary School with a Doctorate in Veterinary Medicine. She was now able to assist Dr. Oliver in a whole new capacity. Clarkston Animal Hospital had become a two veterinarian practice.

Three years later, the long awaited building expansion added three exam rooms, a new pharmacy, a laboratory area and a large reception area to the existing building. The number of clients continued to grow, even through Dr. Oliver’s retirement in 1985. As the new hospital owner, Dr. Fordyce’s dedication and love for animals would continue a history of excellence for Clarkston Animal Hospital.

In 1998, Dr. Fordyce moved the practice from Clarkston to the current location at 711 Church Street in Decatur. At that time, the hospital name was changed to “Church Street Animal Hospital.” With nearly double the square footage of the old building, it was now possible to provide additional services for her clients and their pets.

Today, Church Street Animal Hospital is known for its commitment to superior client service. Our highly trained veterinarians are well equipped to handle critical emergencies or to provide client education during wellness exams.

We are proud of the tradition of pet care at Church Street Animal Hospital. Our modern facility is the culmination of years of hard work and love for animals. Countless people along the way have contributed to our reputation of excellence. We owe them all a debt of gratitude.